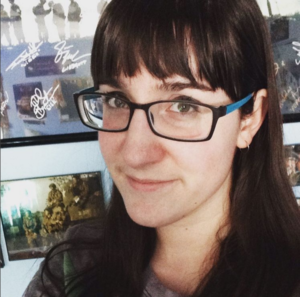 I have worked extensively in the Adobe Suite (especially Photoshop, Dreamweaver, After Effects and Premiere, along with some Illustrator and Flash), Autodesk Maya, and Microsoft Office. I can code in Java, Processing, MEL, HTML, CSS, PHP, and some Javascript. Throughout my career I have worked with many companies from all around the world including Quantum Mechanix, Equality Now, and Kids Need to Read. I now focus on my teaching as well as working as a freelance graphic designer in my free time.

In the winter of 2015, I started preparing for my trip to Normandy, France for the Band of Brothers reunion in the beginning of June.  I was a seasoned Comic Con goer; I knew that at conventions actors usually have 8×10 headshots to sign that are included in the price of autographs.  However, I knew this wouldn’t be like that.  And so I got an idea.  I decided to make 8×10 pictures showcasing each character.  Originally, twenty of the actors were slotted to appear in Normandy, but by the time I got there, only ten were able to go…but I had already made the collages.

In Normandy, the 8×10 pictures were received better then I could have hoped for.  People in line were genuinely interested and were asking me if they could buy some from me.  And that planted a seed of an idea in my head.  I had spent a long time working on these and there is NOT enough Band of Brothers merchandise in the world.  Then, the actors saw them.  I was blown away by their reactions.  Some were taking pictures of them while others were pointing out pictures to the guy beside them.  James Madio wanted to take his home.  Frank John Hughes told me they were better then anything HBO had ever done.  Wow.  And poor Ross McCall signed eleven copies over four days and was still smiling at it by the end.

So, I decided to open this store.  It will continue to grow as I grow and develop my art skills.  I will be adding new products: new prints, button pins, and other forms of merchandise.  The fandoms will continue to change and grow as I discover new and wonderful media.

This store is in no way affiliated with HBO, Playtone, or Dreamworks or anyone involved with those companies.